Speeding up computations in GitHub/CircleCI workflows with Affected Commands

One of the most exciting features of Nx is using the project graph to run the target commands. This article exposes a bit of magic behind the affected commands, explains the common use cases, and shows you how to effectively use them in your Continuous Integration (CI) environment. Finally, we will present you with two CI utilities we created recently that will help you solve this issue.

The affected commands in a nutshell

This feature saves tremendous processing time by running a target only on the projects that were affected by the change. But it's not always trivial what to choose as a reference point for change detection. 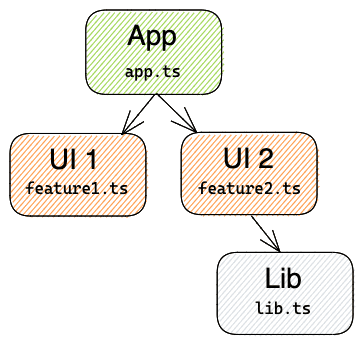 If we were to modify app.ts only the application would be affected. However, if we change lib.ts then not only would the utility library be affected, but also UI 2 and App. The affected command encapsulates the logic of detecting which project nodes were affected by the change.

The command has a simple form:

The target is defined in the workspace.json (lint, test, build...). Affected has several handy options, such as parallel (to run tasks sequentially or in parallel), but the two most important ones are base and head. They are essential in providing information about the scope of the change.

Let's look at this excerpt showing the logic for detecting which files were changed:

If the user explicitly provided a list of files or requested only uncommitted or untrackedfiles, then only these files would be used to detect affected projects. We can also see, that if head is not provided, the default value HEAD will be used. A side-effect effect of not providing the head is that affected logic will also check for untracked and uncommitted files. Obviously, this only makes sense locally where you expect some untracked or uncommitted changes.

Let's see now what base defaults to:

We use git merge-base to find all the files changed between the base and the head: 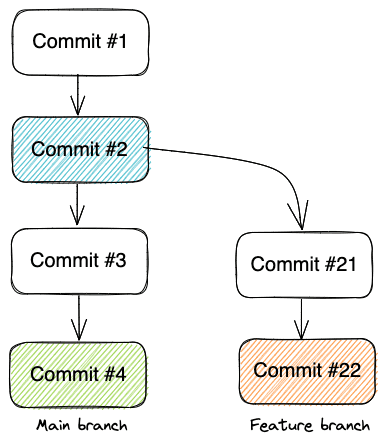 On the diagram above, when we run nx affected (or nx affected --base=main --head=HEAD) we are comparing are all the files changed between commits #22 (orange) and #2 (blue).

which compares the latest commit with the previous one.

Take the above commit graph as an example. Our CI runs nx affected --target=build **on each new commit. Let's assume that commit #3** contained a code that broke the Lib's build and now our main branch is in broken state. Another developer pushed the commit #4 that only changes the UI 2. Running affected would compare commits #3 and #4 and would run targets only on the App and UI 2. The CI would falsely report that the main branch is now fixed, because the last check was successful.

The commits therefore can't just be HEAD and HEAD~1. If a few workflows fail one after another, that means that we're accumulating a list of affected projects that are potentially still broken.

We want to include every commit since the last time we had a successful run. That way we ensure we don't accidentally skip checking the broken project. What we essentially want is to use the last successful commit on main branch as the base:

Luckily most of the CI platforms already provide APIs needed to detect the last successful runs, and using git we can extract the exact commits.

When using affected in our CI platforms, the usual steps in our pipelines are:

Most likely we would have two separate workflows/pipelines - one for the main branch using HEAD~1 as base and one for the PR branches using main branch as the base. We want to inject another step before the run command that would find the last successful commit and store it in the environment variable so that affected commands can use it.

For CircleCI we created the nrwl/nx orb that includes a useful set-shas command for deriving commit SHAs of HEAD and last successful commit:

Using affected can speed up your computation times but unless you use it properly it can also be a source of escaped issues.

In this post we looked at how the affected command works and how to use it, and what is the common issue when using it on the CI.

Our CircleCI orb and Github Action helps you to compare always against the last successful build and make sure you protect against breakages from committed code.

Written by Miroslav Jonas, a software developer focusing on the front-end of things.
He lives and works in Vienna, Austria.